A Connection in the New Basin: North Bank Bridge

Have you visited Boston and Cambridge's newest park?  Few know about this gem of urban parkland footsteps from Charlestown, Cambridge, and the North End.  With the construction of a new pedestrian and bike bridge much needed access will connect North Point Park in Cambridge and Revere Park in Charlestown.

Funded with federal stimulus funds, this new bridge is part of mitigation requirements of the Big Dig and will greatly enhance access to the future skatepark.

The Miller’s River is a tiny estuary that lies beneath the 93 overpass that lies between Charlestown and Boston Sand and Gravel. It is the remnants of an oyster filled expanse of water that extended past Bunker Hill College, the MBTA’s train storage shed, the Galleria Mall and almost to the Cambridge Court House.

A keystone improvement is underway in the form of the North Bank Bridge which was originally budgeted as part of the $80 million in basin park improvements associated with the big dig. This bridge would connect Paul Revere Park with North Point Park and is slated for completion this summer. It would carry pedestrian traffic over the Miller’s River and rail lines.  Ivey St. John of the Charlestown Waterfront Coalition said “We are excited about the new bridge as it will significantly enhance the shoreline and bring more people to both to the wonderful Paul Revere and North Point Parks. More people in the parks make them safer and increases advocacy for our waterways.”  The Coalition is one of several groups who have been quietly working towards its completion.

Today, access to the area is provided through the walk along the entrance to Route 1 North with the painted light poles. While it is a bit desolate, a walk down the path rewards one for the journey. 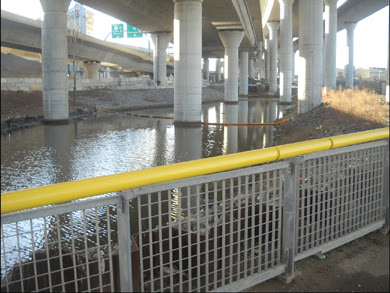 First there is a monument to the potato. Potato sheds were once located where the Bunker Hill Community college Parking lots are. They burned in the 1960’s in a tremendous conflagration that engulfed a few homes on Washington Street. Stories are told of the area smelling of baked potatoes for weeks!

Further on, there are some interesting interpretive plaques that talk of the area’s history. It talks about the filling for the Charlestown Prison and railyards as well as the various bridges that have come and gone through the years.  Eventually the walkway cantilevers out over the river in a cheery yellow metal before ending at a construction zone.  All along the walk they have marked the sidewalk with water depths from an old map, which serve as a great reminder of how extensive the filling was.

There have been efforts to landscape and replant the edge of the river. However,  oysters will not be brought back in the Miller’s River as the area is above the Charles River Dam which prevents salt water from moving upstream.

Written by Andrew Jay
Posted by Charles River Conservancy at 10:36 AM

Any word on when this bridge will be completed? I'm anxious to use it as part of my commute.

A Call for Submission

Stories, poems, photos, art, opinions - we're looking for it all! If you have something to say about the Charles River contact crc@thecharles.org for submission. Thanks!